Unless you have been living under the rock, the shift from television/print to digital media in terms of total ad spend is ubiquitous. But what’s less obvious though certain is the impact. What cable TV did to ad industry around 25 years back, programmatic advertising will be the déjà vu for digital ad space where Internet-first or Internet-only start-ups would have an upper hand.

The marketing expenditure is made more efficient for start-ups by programmatic ads. It allows them to have conversations with the right audience in the right context depending on the data they have about the customers. This is unlike TV or print ads or placing ad banners digitally using Google AdWords. For instance, a pharma start-up selling medical equipments will have targeted ads for hospitals, dispensaries, wholesale medical supplies shops etc. So the conversation starts with the right audience, making the expenditure more efficient and hence effective for start-ups. 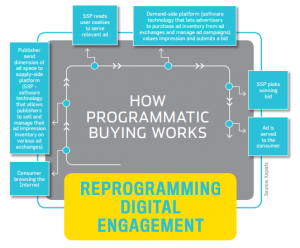 The in-restaurant food ordering and payment start-up Voolsy that switched to programmatic ad buying early this year saw conversions from its campaigns growing from 15-18 per cent to around 34 per cent. The start-up has over 1,500 outlets in its network including Subway and Pizza Hut. “I have a user base of 7 lakh people who have different spending capacity. Traditional formats include offline, social media marketing wasn’t targeted based on location, spending capacity, eating preference etc. With programmatic, we understand the order and payment preference of users and display them the relevant ads. Hence, the conversion is better as they aren’t irritated by the ad because it is based on their behavior,” says Smit Nebhwani, Founder and CEO, Voolsy.

The campaigns and budget can also be tweaked in programmatic buying. For instance, if Indian cricket team is doing well in a cricket match, then Zomato can increase its Cost Per Thousand (CPM – price of 1,000 advertisement impressions on a single web page) real time since programmatic involves bidding. Hence, Zomato will get the inventory of all digital sports website in real time in its favor as viewers usually prefer eating while watching cricket.

The local search engine app CityReach has also seen conversion jumping from zero to 40-50 per cent using programmatic ad buying. Users can look for business listing, local deals, jobs, local buying and selling etc., through its app. Darshan Shah, who heads CityReach, was looking for locationbased advertising for the app in Thane district, Maharashtra. The company has been using programmatic ad buying and is able to register over 5,000 downloads in the targeted area. “We used traditional and expensive advertising earlier like pamphlets, brochures, and hoardings costing around Rs 80,000. But programmatic has been almost one third cheaper,” says Shah.
When it comes to cost, since the value of inventory is determined in real time in programmatic ads, the price is based on demand and supply. The price goes up if demand goes up and vice versa. “For instance, we are entering a contract with cricket news website CricBuzz and it is charging twice the price during current matches of India cricket team,” says Ashish Shah, Founder and Chief Executive Officer, Vertoz – Mumbai-based programmatic ad company. During a cricket match, CricBuzz charges Rs 300 CPM which otherwise would be Rs 150 CPM. 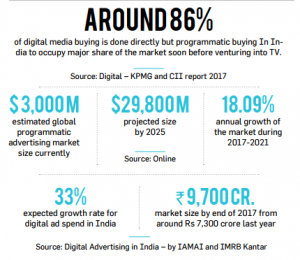 Second, it gives a single window view to track the campaign with consolidated data versus scouting data from different sources manually for analysis in traditional manner. Third, its ability to optimize ad campaign in real time based on the audience reaction against optimizing the campaign only after its completion in regular media buying and selling. In a nutshell, programmatic ad automates digital media buying and selling by pulling out the middleman. This means focused advertising on target groups that makes more sense for start-ups with limited
manpower and cash flow.

“Traditionally if you had to sell your ad inventory, you had to create sales team and then go to clients to finalize the deal. With programmatic buying, the process has become automated through ad exchanges (technology platform to buy and sell ad inventory from multiple ad networks) wherein people on the demand side will bid for inventory,” says Sahil Chopra, Founder and CEO, iCubesWire – Gurugram-based digital marketing firm.

BUILDING CONTEXT
Apart from digital, programmatic ad for TV is still far away in India. Typically it works on Internet-enabled smart TVs wherein the content has the ability to see from which IP address it is getting the audience. “If you are watching Colors TV on your Smart TV then the channel knows from the IP address from where it is getting viewers,” adds Shah. Through direct-to-home, one cannot identify the viewer’s profile.

The market penetration of programmatic ads in India isn’t good enough. Globally, the US, the UK, and Australia have been leading the programmatic adoption. Nonetheless, the share of conversations is intense in India. “Users in India want to understand the technology better and hence they are spending time whether he/she is a marketer or it is an agency.The conversion from conversations to actual executions has increased in last one year and would continue increasing. So adoption has started but it is a long way to go,” says Neena Dasgupta, Chief Executive Officer, Zirca – Mumbai-based digital brand marketing and content solutions company. Google too recently held its workshop on programmatic ads for its boost in India through its digital ad solutions arm DoubleClick.

Going ahead, for programmatic ads in India, new questions would be asked to understand the audience. For instance, a person under multiple profile buckets – an entrepreneur, a foodie, a father, a coach etc., will lead to programmatic ads evolving to a level where it will be a combination of context and the related product. Let’s say, surfing a parenting website would mean having a father’s mindset versus a news mindset if surfing news website. So the audience and context will be linked.

Edit your profile or check this video to know more
Email Us: contact@icubeswire.com